You may also be looking for King Xenon

"Is There a Doctor in the House?"

"Last of the Centaurs"

Xenan was a recurring character on Xena: Warrior Princess and Hercules: The Legendary Journeys. He is the son of Ephiny and Phantes and was born via a C-Section perfromed by Xena during the civil war between the Mitoans and Thessalians.

Ephiny and Xenan met Hercules on their way to visit a Centaur colony in Thrace.

Some time after the Twilight of the Gods, Xenan met and fell in love with the granddaughter of Borias, Nica. The two conceived a child. Her father, Belach, hated the centaurs and put numerous bounties on Xenan's head, which prompted Ephiny to contact Gabrielle from the other side and ask for her and Xena's help in rescuing Xenan. They were successful and Xena once again performed a C-Section to deliver the baby, who was named after Borias. Peace was then made between Belach and the Centaurs.

Ephiny went into labour whilst travelling to Athens with Phantes, her husband, to have the baby where they are more understanding about Centaurs. On their way, they got caught in the the Thessalian and Mitoan civil war, where Phantes was killed by Mitoan hunting dogs. A heavily pregnant Ephiny hid in a bush, until Xena and Gabrielle found her and took her to a Thessalian healing temple. Xena helped Ephiny give birth to Xenan, inventing the C-Section in the process (A technique that she will later use on Nica, Xenan's wife).

In his early childhood, Xenan befriended a much older Solan, who lived in the Centaur village that he visited all the time. Along with the other children, Xenan hid in the caverns from Callisto during her raid at the time of Solan's death.

After 25 years, Xenan fell in love with a young woman named Nica who was carrying his unborn son. The warlord and Nica's father, Belach (also Borias' older son), put a ransom on Xenan's head because he believed Xenan and the centaurs kidnapped his daughter. His mother Ephiny spiritually connected to Gabrielle and Xena to save him. Xena promised Belach that she would bring his daughter back, until she discovered that Nica and Xenan were in love. Xena revealed to Xenan that the centaurs must not go to war with Belach because he is the son of their hero, Borias, as well as the blood of Borias is in their son. When Xena, Ephiny and Gabrielle reach the camp, Belach's army kills all the centaurs, leaving Xenan devastated and wanting revenge for their deaths, but Nica convinces him not go down that path because of their child. During Nica's birth, Xenan hands him over to Belach for her safety, but is later rescued by Xena. Belach finally realizes his father was a good man and lets Xenan go. Xenan and Nica name their new son Borias, in honor of Borias. Belach gives Xenan and Nica a new home so that they can live in peace. Xenan also connects with his mother after Ephiny connects with Gabrielle before going into the light. 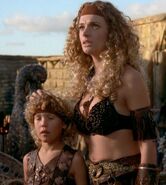 Ephiny and Xenan in "Prodigal Sister"

Xenan with Nica and baby Borias in "Last of the Centaurs"