This article is about the television show. For the character, see Xena. For other uses, see Xena (Disambiguation)".

"In a time of ancient gods, warlords and kings, a land in turmoil cried out for a hero. She was Xena, a mighty princess forged in the heat of battle. The power...the passion...the danger. Her courage will change the world."

Xena: Warrior Princess was an Emmy Award-winning television series which aired from September 4th, 1995 to June 18th, 2001. It was a spin-off from Hercules: The Legendary Journeys, as well as was created by the executives of Renaissance Pictures, Robert Tapert and Sam Raimi. They both became the Executive Producers, along with R. J. Stewart, who was credited as having "developed" it, as well as John Schulian, credited as one of two people who "created" it, with Tapert being the other. It did, however, eventually outlive its "parent" show, running for a year longer.

The series depicts Kiwi actress Lucy Lawless as Xena the Warrior Princess, an ex-warlord who realizes the error of her ways and fights for the Greater Good. Accompanying her is Gabrielle (played by Texan actress Renee O'Connor), a bard and later Amazon Queen, who is Xena's best friend and soulmate. They mainly travel through Greece and the Near East, although venture into ancient versions of Italy, China, England, Japan, Siberia, Norway, India, and Mauritania.

The show is heavily influenced by religious, mythological, and spiritual factors. It primarily focuses on the beliefs and folktales from ancient Greece and Rome, while some episodes focus on themes and folktales from Christianity, Judaism, Hinduism, and Norse paganism. It features many historical and mythological figures, such as Julius Caesar, Ares, Odin and his Valkyrie, and Lucifer.

The crew that worked on the show were ever-changing. Some of the crew stayed from beginning to end, but others left mid-way through to work on The Lord of the Rings. There was no set director, writer or producer, although a few of the crew members from these fields did work on numerous episodes. The show has won 5 ASCAP Awards, an Emmy Award and has been nominated for many more: Joseph LoDuca has been nominated several times for his musical writing and composing.

Hercules-Xena Timeline (chronology of the series)

After being reformed by Hercules, the skilled warrior Xena meets a young bard named Gabrielle, who, after persuading the warrior, accompanies Xena as they travel around Greece in the name of the greater good. The two women soon develop a strong bond of friendship. Before they know it, Gabrielle has inadvertently become an Amazon Princess and Xena is being tempted by her old ally and mentor, Ares, God of War, to return to her evil ways, as he poses as her father and frames her for murder. But Xena's greatest foe is waiting around the corner - Callisto, a woman who witnessed the deaths of her parents at the hands of Xena's army, wants revenge on the warrior princess, as she tries to kill her and revive her former reputation as a cold-blooded killer.

Xena and Gabrielle battle with the Titans, hunt for treasure, are faced with Celesta, the Goddess of Death herself, as well as they are even thrust into the midst of the Trojan war, where Gabrielle is fatally injured, only to be miraculously revived after Xena's desperate attempts to bring her dear friend back to life. And their journey is only just beginning...

Xena and Gabrielle continue on their journey, as Xena is once again reminded of her past, only this time in the form of her son, Solan, fathered by her ex-lover and partner in crime, Borias. Xena is killed in a brutal fight and she relives her time with Julius Caesar and former mentor M'Lila whilst laying on her deathbed.

She is, however, given another chance at life by the spirit of M'Lila and so Autolycus, Gabrielle and Ephiny retrieve Ambrosia and she is able to live once again. Xena is later forced to team up with Callisto (who is now immortal due to eating a Golden Apple) to defeat the former Amazon Queen turned Goddess, Velasca.

There is also a look into the lives of the future descendants of Xena, Gabrielle and Joxer: Melinda Pappas, Janice Covington and Jack Kleinman respectively, as they search for Gabrielle's legendary scrolls that chronicled Xena's journeys throughout ancient Greece.

As the duo fight their way through Bacchus and his Bacchae, help the legendary Ulysses return home and defend themselves against Callisto, who manages to break out of prison and even swap bodies with Xena, the two women grow even closer and continue to build an ever-growing friendship.

As Xena and Gabrielle continue their adventure fighting for the Greater Good, they are faced with a horrifying God, "The Dark Lord", Dahak, who is attempting to take over and dominate the Earth. Xena and Gabrielle head to Brittania, where they help Boadicea to defeat an invading Julius Caesar. However, Gabrielle is attacked and raped by Dahak and impregnated with his child. Gabrielle gives birth to the "child" in a matter of days and names her "Hope". Xena, unconvinced of the child's innocence tries to convince Gabrielle that the "baby" must die, which in turn forces Gabrielle into betraying Xena and faking the death of the baby.

After travelling to Chin to bring down Ming T'ien, the tyranted Emperor son of Lao Ma (Xena's ex-mentor), foiling an attempt on Cleopatra's life by one of Joxer's triplet brothers, Jett, as well as inadvertantly causing chaos with an Enchanted Scroll, Gabrielle and Xena's relationship reaches a breaking point, when Hope returns and releases Callisto from the lava pit and kills Solan, Xena's son. However, from the other side, Solan fixes their friendship, when he takes the two to a land known as Illusia.

They continue to work together, stopping the Persian Army, travelling to Rome to save Vercinix of Gaul (which kills Crassus and sparks a number of civil wars between Julius Caesar and Pompey, setting events in motion for the downfall of the Roman Republic) and escaping from a sunken ship (with help from Autolycus). Dahak makes one more attempt at taking over the Earth, when Hope and Callisto return, which means trouble for Gabrielle when she and her daughter seemingly perish in a lava pit...

A distraught Xena travels to Siberia and the Amazon Land of the Dead, where she hopes to reunite with a presumed-to-be-dead Gabrielle. She relives her time with Borias, Alti and Cyane I of the Northern Amazons. She doesn't reunite with Gabrielle, but does with her ex-mentor Alti, who

shows her a vision of her and Gabrielle's crucifixion, thus proving that Gabrielle is currently alive. After an emotional reunion in Potidaea, they defeat Hope and her son, The Destroyer, one last time.

Whilst Xena continues to be haunted by her vision of death, she and Gabrielle continue their adventures, putting an end to the twisted crusader, Najara, as well as her strange methods of fighting the greater good. They start a peace treaty between settlers and the Horde and travel to India, where they meet Eli, fight once again with Alti after seeing their future lives and defeat the king of demons, Indrajit. It is here that Gabrielle is inspired to become a pacifist and temporarily begins to walk the way of peace.

Xena's vision of death nears as the fall of the Roman Republic and rise of the Roman Empire approaches, as Xena kills Pompey and attempts to kill Julius Caesar. However, one of her old enemies has returned and she and Gabrielle are crucified and left for dead...

Xena and Gabrielle reunite in Heaven. Unfortunately, during a battle between angels and demons, Gabrielle falls into Hell at the clutches of Callisto, which prompts Xena to save her. Instead, she reforms Callisto as an angel and she subsequently helps Eli conjure up the power to resurrect them. However, Xena's memory of her dark past is non-existent and Gabrielle, Eli, Joxer and Amarice conclude that it is due to her broken Chakram. They fix the chakram and fuse it with another, creating a new and improved one altogether.

When Xena discovers that she is pregnant, there is speculation as to who the father may be. The child is later discovered to be the reincarnation of Callisto, who will bring the about the Twilight of the Gods. From the moment Eve is born, the Olympians hunt her relentlessly, which drives Xena and Gabrielle to fake their deaths. But the plan goes wrong and they are accidentally conserved in ice for 25 years, whilst Eve is raised by the Romans. When they awake, they discover that Eve is now an evil Roman commander named "Livia." However, they manage to get through to her after she kills Joxer and she is reformed and forgiven by Xena and Gabrielle. But now that the Deities know who Livia is, the Archangel Michael grants Xena the power to destroy Deities, stripping them of their immortalities in the process, so that she can defend her daughter. Thus the showdown between Xena and the Olympians begins...

Xena, Gabrielle, as well as Eve must now face the consequences of the Twilight of the Gods and the 25-year sleep. They struggle to maintain a mortal Ares, when he is driven mad by the Furies and Xena discovers that her once peaceful village has been devastated by Mephistopheles, the King of Hell, as well as her mother was burnt at the stake. When putting things right in Amphipolis, she manipulates the Archangel Lucifer into giving in to the seven deadly sins and he becomes the new king of Hell. By the sixth season this relationship has become romantic.

Gabrielle begins to question her killer motives when she is vengeance-striken upon discovering that her parents were killed by a violent warlord, accidentally killing an innocent boy in self-defense and almost getting killed herself, when she is attacked, injured, as well as later kidnapped by Cannibals due to her questioning her motives during a battle. (That latter of these makes her realise that she must listen to her gut instinct.).

Xena's dark past returns once again, this time in the form of Odin and his Valkyries, a faction of which once included Xena as a high-ranking member. She is forced to accompany the warrior Beowulf to the Norseland on a supposed suicide mission, where she must kill a monster she created during her time with the Valkyrie known as Grindl. However, things go wrong, when Gabrielle is put in grave danger and only Xena can save her - but she has lost her memory (due to the power of the Ring, an item which means grave danger for those without forsaken love) and is now marrying Hrothgar, a king. However, Beowulf helps Xena come to her senses and she saves Gabrielle and defeats Grindl.

When Julius Caesar escapes from the Underworld and creates an alternate universe in which Xena is his empress and Gabrielle is a mere playwright, he includes Alti, who predicts that Xena's real story will end when "[her] playwright is unable to save [her] Fallen Angel." Alti's prediction is once again accurate, when Xena and Gabrielle travel to Jappa and Xena is forced to die to fight Yodoshi, an evil spirit who has trapped the 40,000 souls that perished in the fire inadvertantly caused by Xena in the village of Higuchi. Gabrielle has until the sun sets to take her ashes to Mount Fuji and revive her after the battle, but Xena does not realize the consequences of her actions until after the fact and she has not told Gabrielle the full story...

Although Hercules: The Legendary Journeys had an equal number of seasons as Xena: Warrior Princess, the first season had thirteen episodes and sixth season had only eight. XWP enjoyed full 22-episode seasons for its entire six-season run. 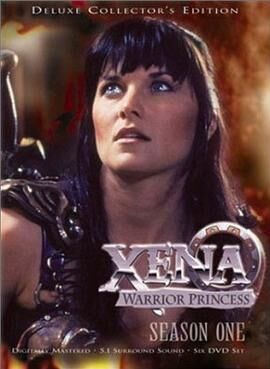 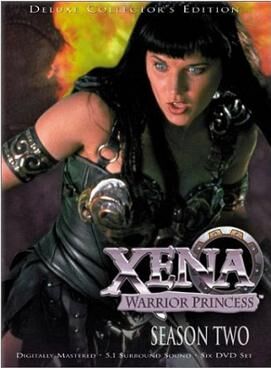 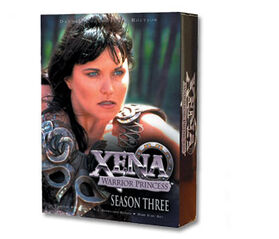 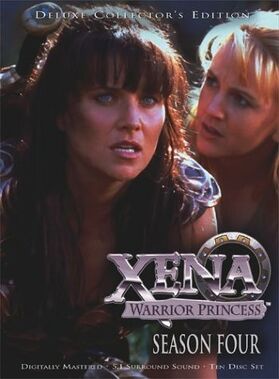 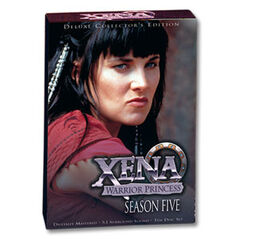 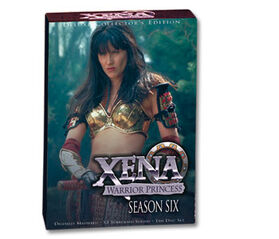 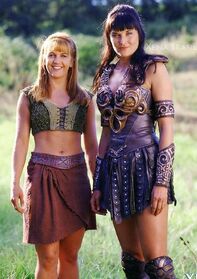 Lucy Lawless as Xena and Renee O'Connor as Gabrielle