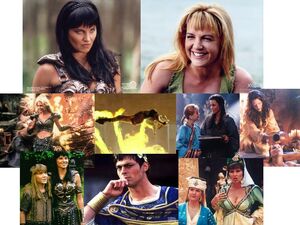 Season Three of Xena: Warrior Princess aired from 29th September, 1997 to 19th May, 1998. This season's main plot involved Dahak, Hope and The Rift.

Season Three was notable for being the first of Xena to have a running storyline. season four followed this style with Xena's Vision and season five followed this with the Twilight of the Gods. While season six didn't have solid storyline, most of it's episodes tackled the effect of the Twilight and 25-year sleep.

NBC/Universal DVD Release
Add a photo to this gallery

Retrieved from "https://hercules-xena.fandom.com/wiki/XWP_Season_3?oldid=66160"
Community content is available under CC-BY-SA unless otherwise noted.