Themis is Titan - Goddess of justice, law and order, in the myth she is counselor and the second wife of Zeus. He owes this honor to the services rendered to the gods, inventing the oracles, the rites and the laws. Historically, Themis wields a sword with one hand, while with the other holds a scale.

According to myth with Zeus, has six or nine daughters, Eunomia, Irene and Dicéa and  goddess seasons, Talo (spring goddess), Auxo ( summer goddess) Carpo ( Autumn - Goddess ) and the three Fates.

Statues of Themis depicted her wearing a blindfold. (XWP: "The Execution") 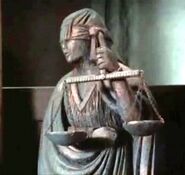 Add a photo to this gallery
Retrieved from "https://hercules-xena.fandom.com/wiki/Themis?oldid=71695"
Community content is available under CC-BY-SA unless otherwise noted.