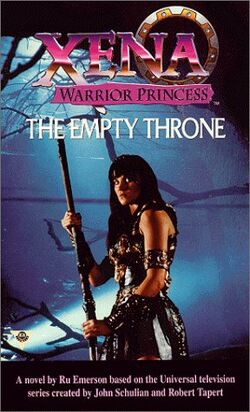 The Empty Throne was the first novel in Boulevard Books' Xena: Warrior Princess series. It was written by Ru Emerson and set in Ithaca.

In the years after the Trojan War, as warriors and kings travel the ancient world returning to their homes, Xena, the Warrior Princess, and her apprentice, the bard Gabrielle, travel to Ithaca on a mission for the king of Sparta.

Yet the throne of Ithaca sits empty, waiting for the return of its ruler, Odysseus, and the realm is overrun by gangs of armed bandits determined to claim the kingdom and its queen for their own. With only their intellect and the weapons they carry, Xena and Gabrielle set out to free Ithaca from its invaders. But will that be enough to defeat the warlord Draco and his thugs?

Based on the hit television series, Xena: Warrior Princess, created by John Schulian and Robert Tapert, The Empty Throne continues the story of Xena and her trusted companion, Gabrielle, as they fight to protect the innocent and to redeem Xena’s troubled past.

This article is a stub, or very short article, that is most likely incomplete and needs expansion.

8-Book Kindle Collection
Add a photo to this gallery

Retrieved from "https://hercules-xena.fandom.com/wiki/The_Empty_Throne?oldid=63202"
Community content is available under CC-BY-SA unless otherwise noted.