"Norse By Norsevest", "Somewhere Over the Rainbow Bridge"
"I paint what I see"

The Norn is the Asgardian equivalent to the Olympian Fates. She records history in her Book of Fate, and seems to have some skill at accurately predicting the future. The Book of Fate's reputation is powerful, but even the Asgardian gods sometimes forget that the Norn records only the past and the present, not the future. Aware that a creative solution was needed to resolve the strife caused by the death of Balder, the Norn helped Hercules to restore the past when it was changed by Loki.

Her way of life is nomadic has a calm, wise and neutral personality but she guides anyone who has doubts but is cautious with her answers, the norn says she has been in the world forever.

The Norn is immortal she possessing powers similar to other gods. Her special power is a form of supernatural hindsight, allowing her to view the past and present ( vision remote ) and speaks in riddles about the future, and she seems to be immune to the cold and frozen of ragnarok. She is considered very wise and is respected by the Norse Gods. 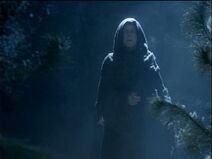