She was a descendant of Xena's living in the early 1940's, who, along with Janice Covington and Jack Kleinman (descendants of Gabrielle and Joxer respectively), discovered the Xena Scrolls and the tomb of Ares. She was much more naive than her ancestor and she wasn't as mentally or physically capable, either.

Along with discovering the Xena Scrolls, she also discovered one half of Xena's broken Chakram. When John Smythe, a rival archaeologist, discovers the other half, the Chakram reconnects and Mel is taken over by the spirit of Xena. Not only does the Chakram reconnect, but Ares is also released from his tomb. Xena is forced to open the caves, allowing Ares to escape to the open world. Xena does, however, stop this and imprison him once again, by using the Chakram. Once she uses it, the Chakram snaps in half again, causing Xena to leave Mel's body and return her to her normal self. 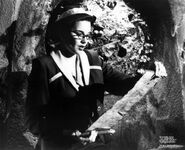 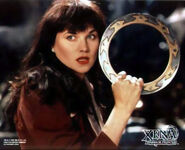