Wikipedia has a more detailed
and comprehensive article on
Greece

Greece is a country that is located in south-eastern Europe, a peninsular region surrounded by the Mediterranean Sea. It is the home of the heroes Hercules, Xena, Iolaus, Gabrielle, Jason, and Joxer amongst others. Greece is subdivided into numerous provinces, cities and kingdoms, with the majority of the populace living in rustic villages. Nonetheless, there is a general shared culture and religion amongst the various regions, and all of them in some way accept Athens as the capital.

Greece and Mediterranean Sea in the center known world 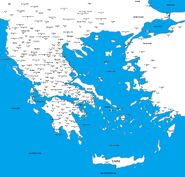 A map of the Xenaverse's Greece by Dylan MacFarlane