You may also be looking for Death or Thanatos, both identified as "Death"

XWP "Looking Death in the Eye"
Celesta is the Goddess of Death - Herald of Hades is Death personified. She guides the souls of dead mortals down to the Underworld to Hades.

If Celesta is captured or restrained no mortal can die and those marked for death will stay in the land of the living. Celesta carries a candle with an ever-burning flame. If the flame were to die, Celesta herself would cease to exist and there would be no death. She was captured by Sisyphus when he feared his own death. He planned to let her candle die so he could remain immortal but Celesta was rescued by Xena and Gabrielle (XWP "Death in Chains").

Years later, Athena demanded that Celesta kill Eve. Celesta refused, as it was not Eve's time. Shortly thereafter, she was captured by Xena and her tears (which put mortals into a death-like sleep when consumed) were extracted in an elaborate plot to convince the gods of her and Eve's death (XWP "Looking Death in the Eye").

Hercules first encountered Celesta when he accidentally killed Bartoc. Years later, Celesta came for Bartoc's younger brother Jaris and Hercules convinced her to give Jaris one day to sort out his business before death. During both their encounters, Celesta expressed an almost maternal fondess for Hercules and told him that she and many other Olympians were proud of him. (HTLJ "Regrets... I've Had a Few").

Since Celesta is the Olympic personified of death she has the Powers and Abilities of all Gods have like, but his special power is: 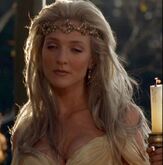