Archdemon is the name given to the inhabitants of Hell, after eating its Fruits. When Gabrielle fell into the Pits of Hell, Callisto forced her to eat it and she turned into something resembling Callisto, who had already been transformed into an archdemon. Archdemons had leathery, reddish-brown skin, bony, bat-like wings, and horns protruding from their foreheads. Many of them wore macabre armor. Archdemons often flew up from the caverns of Hell to raid the mountains near Heaven, where they were more than a match for Guardian Angels and needed to be driven back by Archangels.

They are the counter-part to an archangel and are the next level up in the hierarchy of Hell, above the average demon and below the King of Hell. Their power is comparable to that of an archangel, meaning that they are on average more powerful than demigods and some minor gods, but weaker than major gods. Unlike the lesser demons of Hell, Archdemons cannot be reincarnated into the mortal world without some sort of divine intervention, or unless they are absolved of their sins, in which case they become pure souls and are therefore fast-tracked for reincarnation. 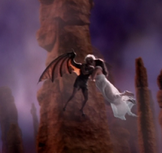