Ambrosia is a consumable created by the Greek pantheon. It is known to mortals as the Food of the Gods or the Nectar of the Gods, as it can appear both as a solid jelly-like fruit or a liquid. When consumed, it has the power to revive a recently dead mortal, or to turn a healthy mortal into a god. Ambrosia was found in only a few places outside of Mount Olympus. One was in a temple of Sumerian treasure, but was destroyed by Xena when she threw it into a lava stream. Another was locked in Amazon lands, which could only be opened with one of the Daggers of Helios. That was the Ambrosia eaten by Callisto and Velasca to become goddesses, and the one that restored Xena to life. The rest of it was destroyed when it landed in a fire pit.

Other pantheons did not use Ambrosia; the Norse pantheon, for example, used Golden Apples instead.

Although forbidden to mortals, if a healthy mortal consumes Ambrosia, it will transform them into a god, as seen in the cases of Velasca and Callisto (XWP "A Necessary Evil"). A diseased or dying mortal can be restored to life by eating ambrosia (XWP "The Quest"), though this will not impart any supernatural powers. Several caches of ambrosia were scattered throughout Greece, hidden in heavily booby-trapped locations. Most of the stored ambrosia has the appearance of a floral-shaped gelatin mould or cluster, though it can take other forms, as Aphrodite handed Psyche a liquid ambrosia in a goblet.

Zeus can remove the godhood granted by Ambrosia, and can also create gods by his own will without using Ambrosia. Hera can also grant the gift of Godhood to mortals.

The first was located in a cave in the Hall of Ambrosia, at the foot of Mount Poulis. It was kept in a golden bowl suspended by golden chains. Somehow, Xena knew of the ambrosia's location so she strived to prevent both Thersites and Petracles from finding it before she did. When she did find it, she threw it into a fire pit.

The second stash of ambrosia was located in the roof of a small chamber at the bottom of a staircase, well protected by fire and a bed of large spikes. Access to the ambrosia was only available by several climbing ropes and a key: the Dagger of Helios fit into a stone that released the ambrosia from a hatch in the roof. Most of this ambrosia was destroyed by fire, although enough of it survived for both Velasca and Callisto to eat it and become goddesses as a result.

A third stash of ambrosia belonged to the Greek Amazons. After being stripped of his godhood, Ares declared war on the Amazons in an attempt to get his hands on it, so that he could reclaim his godhood.

Callisto: She ate Ambrosia in the episode "A Necessary Evil." Her powers appeared to revolve primarily around fire, perhaps due to the traumatic memories of her family burning to death. She could create fire and her teleporting looked like a blast of fire. She could also throw lightning, possessed supernatural strength, telekinesis, energy blasts, regrow limbs, and possessed the typical physical invulnerability shared among all deities.

Hercules was given ambrosia by his half-brother Apollo while still a teenager. Hercules, however, realized that he wasn't ready to be a full god yet and had Zeus take his additional powers away. When Hercules next chose to become a god, he received his powers directly from Zeus, without the need for ambrosia.

Psyche: Aphrodite gave Pysche a goblet of ambrosia, as a way of apologizing to her for the things that happened to her over the course of "The Green-Eyed Monster". Psyche married Cupid and had a baby, Bliss, and was expecting another child with Cupid.

Velasca: She ate Ambrosia in "A Necessary Evil" and named herself the "Goddess of Chaos." Her powers seemed to follow a theme of weather, likely in keeping with the theme of chaos. In addition to the standard strength, teleportation, immortality and invulnerability of all gods, her supernatural powers included creating tornadoes and lightning. 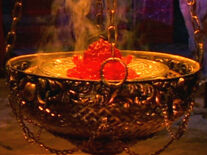 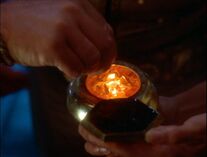 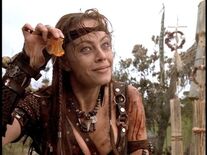 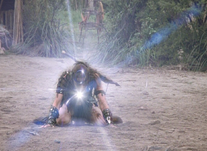