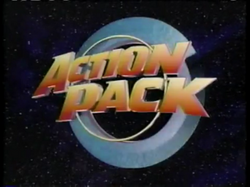 Action Pack was the label given to certain television films and series distributed by Renaissance Pictures and/or MCA/Universal between 1994 and 2001.

When Xena: Warrior Princess and Cleopatra 2525 stopped production in 2001 the Action Pack label was discontinued.

Here is a link to the original Action Pack trailer.

Logo from Www.mca.com
Add a photo to this gallery
Retrieved from "https://hercules-xena.fandom.com/wiki/Action_Pack?oldid=64009"
Community content is available under CC-BY-SA unless otherwise noted.